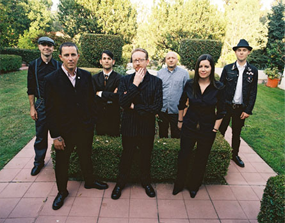 Flogging Molly is an American seven-piece Celtic punk band from Los Angeles, California led by Irish vocalist Dave King, known for his work with Fastway. They are signed to their own record label, Borstal Beat Records.

Prior to forming Flogging Molly, Dublin-born Dave King was the lead singer for heavy metal band Fastway featuring guitarist “Fast” Eddie Clarke of Motörhead and bassist Pete Way of UFO in the early to mid ’80s. He later fronted a hard rock band called Katmandu (1991), featuring Mandy Meyer of Krokus on guitars. Afterwards, Dave King retained a record deal with Epic records and began to work on a solo album, but began to reconsider his record deal when the label opposed his idea of bringing in traditional Irish instruments. King negotiated out of his record deal to go his own way musically soon after.

In 1993, King met guitarist Ted Hutt, bassist Jeff Peters, and fiddle player Bridget Regan and put together a rock band with a Celtic feel. They began to play a mix of Irish traditional and rock. Putting Dave’s poetic lyrics to rocking melodies, they played at a Los Angeles pub called Molly Malone’s weekly building a small but loyal following. Together they wrote songs such as Black Friday Rule and Devil’s Dance Floor, which was the beginning of Flogging Molly’s unique[citation needed] sound. Ted and Jeff then left Flogging Molly because an earlier band of theirs received a record deal. Dave and Bridget began to find new members and the current band was formed.

They continued a routine of playing every Monday night at Molly Malone’s. Then 17-year old Nathen Maxwell snuck into a show as a fan and soon after joined the band. They put out a live album, Alive Behind the Green Door in 1997. In an interview with Kerrang! magazine, King stated that the band’s name comes from the bar (Molly Malone’s) that faithfully supported the band from the very beginning, “We used to play there every Monday night and we felt like we were flogging it to death, so we called the band Flogging Molly.” They were signed onto SideOneDummy Records after a show when the record company’s owners attended a concert and noted their intensity.